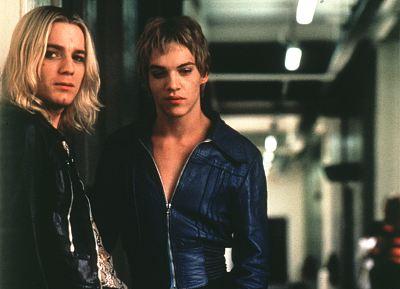 [Netflix] Ten years after British glam-rocker Brian Slade (Jonathan Rhys-Meyers) fakes his assassination onstage and disappears from view, tabloid journalist Arthur Stuart (Christian Bale) is dispatched to deconstruct the legend of the bisexual pop star. In the process of interviewing Slade’s cohorts and colleagues, Stuart gradually strips away the veneer of makeup and glitz, revealing the empty core of both the man and the music.

I enjoyed it, even when I wondered why I was watching it. Glam Rock isn’t my thing so I attached myself to the things I did like and all the actors is what kept me interested. I mean this movie had Christian Bale, Ewan McGregor and Jonathan Rhys Meyers and all of them in undress and at certain times touching each other… well that alone made my day. Yeah, and the songs were good.

It actually had a good twist towards the end even though by this time I wasn’t really interested like Arthur’s publisher what happened to Brian Slade. The parts I did enjoy were how teenager Arthur connected to Brain Slade or should I say the glam rocker’s persona. Slade wasn’t afraid of being himself and saying he was bisexual. (You could see how powerful a media personality can influence on how, whether good or bad on mass; this connection can be important to a young person trying to find their way.) However in truth, the real Brian Slade wouldn’t be considered a good reference for anyone’s looking up to and I think what I did like is the adult Arthur’s discovery of that as well.

Secondly, I like the fact that was the most time I heard the word bisexual in all connotations in a movie. Not liking was probably the behavior associated with it. I don’t mind the bad stuff mixed with the good because it is what it is. The good was what I said before but it seemed overtaken with the bad. Or maybe I don’t know what I am talking about and just say it was the 70?s.

Do rent or buy it, either way watch it and you like it.