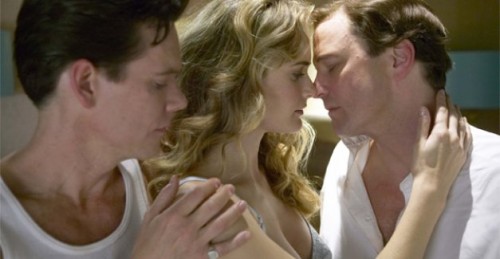 Synopsis:
[Netflix] Twenty years after beloved comedy team Vince (Colin Firth) and Lanny (Kevin Bacon) split up, journalist Karen O’Connor (Alison Lohman) investigates the mystery behind the duo’s demise in this crime drama. Back in the 1950s, Vince and Lanny were the darlings of showbiz, but then a beautiful girl was found dead in their hotel room, and though both funnymen had alibis, their longtime friendship ended. Can Karen uncover the truth behind the tragedy?

Review:
Okay: absolutely loved the mystery, the backstory, the flashfowards, but mostly I love that Kevin Bacon and Colin Firth were naked. I’m not saying naked for titillating purposes but I do like nudity and simulated sex in a film where it makes sense to have it. It was best because they were men, who for all purpose have a reasonably popular careers and they performed these scenes that only less popular male actors have done. Now I am not saying they’re brave because then I would have to say that male porn stars are superbrave for performing actual sex for us to enjoy, strikes me of hypocrisy. However it is the risk they took that I am impressed by as Hollywood still makes it hard for male actors to do these roles without stigma.

I love the movie, get it for your collection. I could say a lot about the movie but why, these actors, all of them are proven winners so getting them together seems a no-brainer. It was great just watching them do their work, especially Kevin Bacon and Colin Firth. I know this movie is about the reporter Karen but I would sometimes forget why she was there and preferred they stay in the past and watch those two work. Colin’s Vince beating the shit out of the guy in the bathroom was so… I hate to say cool, but it was as he was protecting his partner from that man’s bigotry. It was like they used Vince’s Englishman stereotype on the Americans and totally forgot they have not so proper gentlemen in England too.

Yeah, watch the movie and decide yourself. 🙂