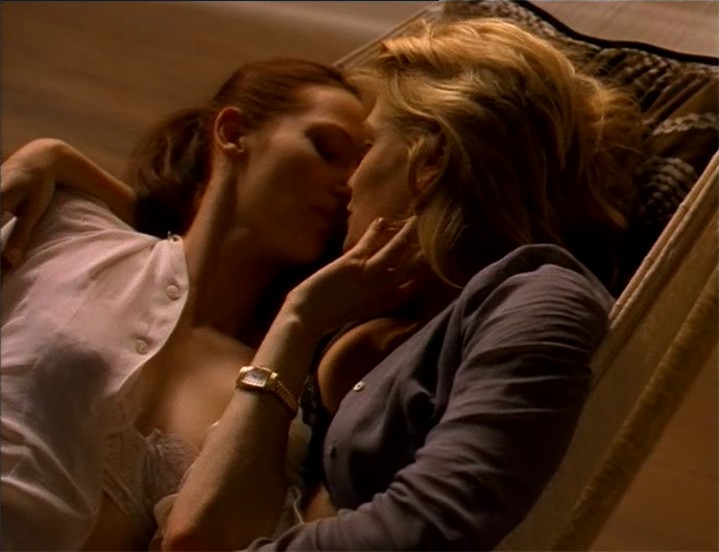 Synopsis:
[Rotten Tomatoes] An outwardly successful woman teeters on the brink of emotional collapse in this psychological drama. Evelyn Stevens (Tilda Swinton) is a skilled and well-regarded attorney who is being considered for a prestigious judicial appointment. However, she’s plagued by self-doubt and neurotic obsessions (the “perversions” referenced in the title), including an obsession with expensive clothes and cosmetics, lingering fears about her relationship with her lover John (Clancy Brown), an exaggerated sense of competition with the new lawyer in her office, and an intense sexual curiosity about Renee (Karen Sillas), the psychiatrist who has just moved into her building. Evelyn is forced to put her own problems on hold for the moment when she learns that her sister Madelyn (Amy Madigan), a Ph.D candidate struggling to complete her doctoral thesis, has been arrested again for shoplifting. In time, the two sisters realize that they have to come to terms with the psychic damage inflicted upon them in their childhood. Female Perversions was based on the best-selling novel by Louise J. Kaplan.

Review:
Warning: This is a confusing review for a confusing movie, I don’t plan on actually making sense. OKAY!

I won’t lie but I had to wait a few days just to understand this movie and that is saying something. I still don’t get it or rather I kind of do but I think I still find it strange too. I find out that this is based on feminist writings and maybe that helped me put this movie into prospective. We have all these women with situations where they all practice a type of “perversion” in their lives, the main character Evelyn is insecure in her abilities and therefore uses artifices such as clothing, makeup and a type of armored professionalism to just get through the day, but inside her self confidence is eroding and it’s falling apart in chunks. She has a long term relationship with a man but starts a new one with a woman (I don’t know why but this relationship becomes transient in nature as well). So while Evelyn is being recognized and getting a possible judgeship, her sister Amy is arrested in a nowhere town for shoplifting, Evelyn does her sisterly duties as a lawyer and tries to get her out but it’s the weekend and nobody is working the weekend in this nowhere town. What we get is the background for the sisters obvious problems with each other and their father.

I think this is where we see how both women adjust not to each other but how family and society influence both women where one is insecure and the other is possibly suicidal.

There are other characters in the cast but I think these other women just didn’t work for me because I couldn’t see their point of view, it was too strange and odd from where I was coming from to understand. Such as the desperate very feminine(maybe in the 1950’s old school way) mother who relies/needs including married men to fulfill her fantasy of belonging rather than caring for her own child and she really doesn’t care take of her child who is going through puberty/”the change” but instead of getting support, she is basically abandoned and left to her devices, such as cutting. The only female the in the kid’s life is the stripper aunt who is very sexual but doesn’t seem to like men much or has a very cynical view, I think.

The men are insignificant in this story and it is mostly about Evelyn then Amy and both struggle to deal with the shit in the lives from either their family or the outside world. I’m stopping here because this is giving me a headache. If nothing else if you can do better, I suggest you rent or do what I did and watching it on demand, or something similar and explain it to me.