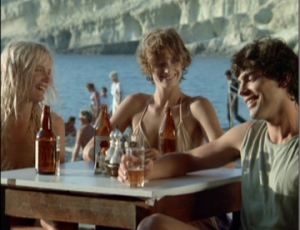 Synopsis:
Michael and Cathy, (played by Darryl Hannah and Peter Gallagher) a young couple who have just graduated from college. They vacation for the summer on a Greek island. When visiting a nude beach, Michael, who says he’s never been with another woman noticing another beachgoer in passing but later on meets her later on. Micheal talks to Lina (played by Valerie Quennessen) and soon after starts an affair. Cathy sees an immediate change in Michael and in turn he confesses his infidelity and from there things go for a turn in relationship dynamics and soon they’re getting caught up in the uninhibited energy that surrounds them. Cathy lets Lina in their lives after a few bumps and they seems to get closer and even fall in love.

Review:
This movie is dated and not just Darryl Hannah not looking the way she use to but the feel is so early 1980’s where the sexual revolution is somewhat in its twilight years but still getting a last gasp in movies like this.

This is a poly movie not what I was looking for at the time but it is a cute but eventually dull, not boring movie. This movie is a very light film, they are all beautiful young people and I did like that they were started to act like a family more than a one night stand.

The part when Cathy’s mother comes to visit and while a little humorous felt forced in like they needed the outside world to encroach and probably bring reality into it which I think could of been cut.

I don’t know, I thought maybe even with the gorgeous scenery I should be impressed but the main characters were the ones that frustrated me the most and I still don’t why after I have watched this movie.

It is a simple plot and the ending wasn’t the predicable sad ending kind and that was nice but I am wondering now typing this because the players were two women and one man which is the male fantasy trope. Would this of happened the way it did if it was two men and one woman. Would it come off as territorial rather than commutative?

Well rent the movie if you can find it but you probably can get it cheaper to buy.