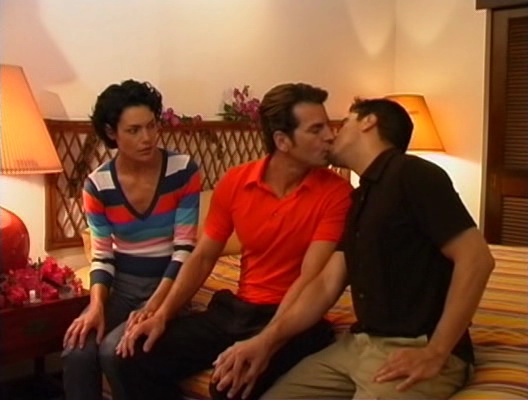 Synopsis:
[Amazon] A newly engaged couple travel from the U.S. to the romantic tropical Isle of Contadora, off the Gulf of Panama, to celebrate their recent commitment to each other. Upon arrival, they meet their host and tour guide Gabriel (Tony Santiago), a hopeless romantic who is confused about his own sexual identity. As Gabriel accompanies the couple on island adventures, both individually and together, bisexual feelings and experiences begin to flourish. An unexpected reaction comes from Helen (Renee Pietrangelo) when she learns her fiancé Mike (Vincent De Paul) and Gabriel have spent the night together in a deserted island location, and have admittedly “fooled around”. Surprising bisexual twists and turns follow, reminiscent of the Theatrical and Home Video Hit, “Threesome”. Will the couple’s engagement survive, and will Gabriel become a part of a newly formed complex relationship?

Review:
I saw the cover with three people in an embrace and it intrigued me.  While I don’t like starting off with what I didn’t like but it is usually what you remember first and unfortunately more vividly. I like the premise but I could not help seeing the difference when you use digital video and film which I wouldn’t have mind but it was compounded with let’s be honest the guy behind the camera, as to whoever was shooting the movie. There was times I wanted to tell him to stop and wait, follow more slowly with character in the shot and damn it put the whole face in the frame. There was no reason to cut off people faces in the worst way.  Now the writing was at times going from one logical statement/situation to huh? and you well I had to fill in the blanks to keep the continuation properly.

Now did I like it? Yes, I actually did because with all the problems it had it still was a enjoyable movie. You see, I don’t have the same expectation from low budget movie that I would have from a movie that has money to spend. I do think this movie could of been done better by someone *coughcameramancough* who needs either film school or get more education in filming with a digital camera but once I understood the plot I sat back and just watched.

Back to the difference, a major studio would of done this better but would they have even tried if there wasn’t any substantial profit involved. So if low budget films are willing to try these themes that wouldn’t get rewritten many times before it becomes so palatable that nobody watches, then these budget films movies does get a slight bias by me.

Unless they are truly awful, then they’re on their own.