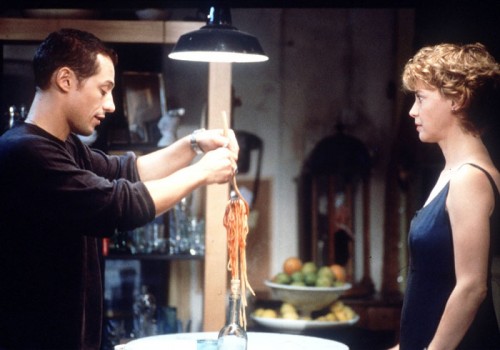 Synopsis:
Antonia (Margherita Buy) and her husband Massimo (Andrea Renzi) have been living a happily married existence for the better part of 10 years (Me: I thought this was 15 years) when a sudden and tragic accident kills Massimo. Barely able to survive her grief Antonia discovers that her beloved Massimo has been carrying a secret life for a good many years. Shocked out of her grief, Antonia begins to search for details and any information leading to Massimo’s mistress, only to discover that his secret lover is a man, the very handsome, young Michele (Stefano Accorsi). When she slowly begins to meet the rather large extended “family” of friends who spent so much time with Michele and Massimo over the years, Antonia finds herself drawn to her husband’s hidden life.

Review:
This is about a husband (Massimo) who dies early in the movie and the rest of the movie is about the wife (Antonia) finding out that the love of her life was cheating on her with another man.

After his death she finds a painting with a secret love massage on the back in her husband’s effects and realizes that he had a “mistress” for seven years. She decides to find out about the other woman and gets an address hoping to either understand or have a confrontation with the person who had no right to be in her marriage.

Now she finds the place and the “mistress’s” friends realize who she is but protect their friend however that doesn’t work in the end because the he gives himself up and proceeds to tell her off.

They both relate to each as the other person in Massimo lives and find a strange friendship forming between themselves and the rest of Michele’s “family”. Through out Antonia is dealing with grief and justifiable anger and eventually letting go to become an independent woman at the end.

There are parts of the film that breaks this movie me, a major one that befuddles the fuck out of me. Antonia and Massimo’s lover(Michele) talk about Massimo and what he means to them which brings about jealousy and resentment on both their parts which is understandable but I am sorry Michele still comes off as a bigger dick. There is a dinner scene where it starts off with the transgender woman is talking about going home to her brother’s wedding and they don’t know she had transition but they ask Antonia if she should hide her true self or go as a man and Antonia believes that telling the truth is the better option which is subtly telling the group that lying to her was wrong which everybody gets as you can’t hear anybody responding back but then Michele laying into a bitchy way telling her she didn’t know Massimo at all and you don’t know where is was when he was lying to you… It makes her leave the room.

That the befuddling part because at this point Antonia has been quite accommodating to the lover and after that scene she should never went back and said fuck you. After this point I was no longer sympathetic to Michele’s side.

There is more and overall I enjoyed it but like I said Michele wasn’t any longer what I cared about besides after the husband’s death, this is really the wife’s journey anyway.

There is a supporting cast of people I have already forgotten with the exception of the Antonia’s mother who wanted her daughter to look at it from the lover’s POV because she was the lover at point too. Antonia in that instance gave her the right response. I rolled my eyes at he mother for saying what she did, it was like I need to justified his affair by justifying yours. The AIDS patient Ernesto? all his scenes and role were unnecessary so I assume they serve a purpose outside of this film, (I do remember that at the end there is a gay pride parade. Perhaps the director wanted to make a statement.) and lastly Emir, who comes in the last reel and taking a liking to Antonia and she to him but in the end he helps her finish the story.

Now your thinking I don’t like the film, I actually do. Maybe not as much as another reviewer would (to me it’s feels like a Lifetime movie) but the ending was the only sensible one it could have and after sitting with it, I said from the beginning this was never about Michele or Massimo, they simply served a purpose for Antonia to leave and find find something better.

PS. (Quick Actor Review): I hope Stefano Accorsi who plays Michele in this movie is a better actor from this movie because bloody hell that man couldn’t give any expression such as grief or devastation on face, he always look constipated.