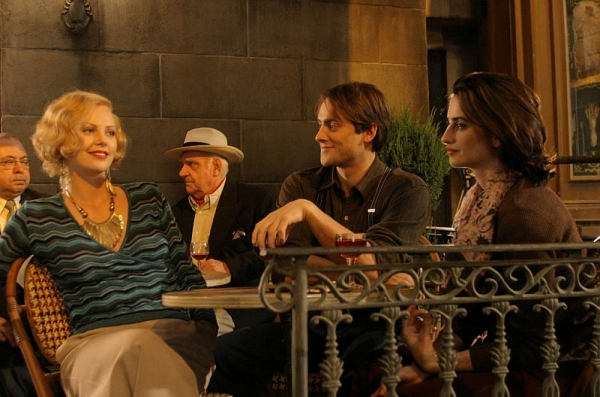 Synopsis:
John Duigan helmed this sexy film starring Academy Award-winning actress Charlize Theron as Gilda, a flighty-but-charming socialite who finds her true match in Guy (Stuart Townsend), an intellectual Irishman who wants to battle in the Spanish Civil War — and who convinces Mia (Penelope Cruz), Gilda’s confidante, to do the same. But Gilda has other plans that may, in the end, endanger her life more than supporting the war.

Review:
Sorry this isn’t my best in grammar but this is the third time I am trying to write this review because I kept losing the drafts so I am not in the mood to write this over again. I found this a surprising movie to watch about a temporary triad because it takes place during WWII and because I wasn’t expecting it as I rarely if at all. (Though I should of seen how Gilda acting with her uni boyfriend, which seems to be an open relationship.) I haven’t watched Charlize Theron in a movie but she is known as a good actress (Monster) and the rest of the cast including the man in her life Guy played by Stuart Townsend and the woman Mia played by Penelope Cruz (she was the initial reason I watched the film).

It starts pre-WWII and the Spanish Civil War is the big thing which Gilda wants absolutely nothing to do with since Guy and Mia for personal reason wishes to go and volunteer to help the cause which leaves Gilda alone but when WWII arrives, Gilda is with a German solider but at a point of reckoning Guy and the audience is shown another side of Gilda, to which earlier in the film we get glimpses of.Why did I start in the middle of the movie? Half laziness, part I don’t want to rewrite again. However I think the bulk of story and my opinion starts to mesh for me is in the middle. Before the war Guy and Gilda is what you expect of the late twenties/early thirties characters, well Gilda anyway who still has her family’s money and her daddy complex issues but if I seem nonchalant about these early 30 or so minutes I am not, because even though this movie is through Guy’s point of view, it is really about out girl Gilda and how she changed this man’s life.You should understand the first 30 minutes of the film is preparing you not for Guy or even Mia character to evolve but is giving you the reasoning and eventual formation of Gilda’s logic until the last minutes of the film where you get to follow along with Guy as he maybe understands Gilda and her love for him.

There are other characters in the movie that are interesting but really who are fulfilling roles that are necessary to get the movie going including Gilda’s college man who at the end gives Guy an important message. Gilda’s father who gives her character some depth to her emotional state. Remember when I said “temporary triad”, well it’s war so I suggest you prepare yourself that people will die.